How To Ruin Christmas for a Vampire


Her holiday would not be ruined by a few pranksters who did not know she was the queen of Christmas.

By the time she was done with her first set of cookies, it was time for the Christmas party at the senior center. She boxed up the finished ones and made sure to tie each package with a large pretty bow in red or green. She had made an extra package for her neighbor.

No one that young and handsome should be alone or cranky on the holidays. She took off her apron from over her tight wool sweater and even tighter blue jeans and put on her winter coat. It was blue with black feathers around the cuffs and collar. Her dark hair was pulled up in a ponytail.

Diana checked her face in the mirror by the door and made sure her shimmer cherry gloss looked particularly luscious against her creamy brown skin. She put the rest of her cookie packages in the back of her car before crossing the street.

How To Ruin Christmas REACTION

Her boots crunched on the soft snow and the dim evening light reflected off the powdery substance as she crossed the street. She looked up at the darkened house that somehow reminded her of the ghost houses she had seen in a few horror movies. She felt a chill go up her arms as she opened the gate and it creaked ominously every millimeter she pushed it. She looked up at the window once again expecting to see him looking through the thick drapes because he heard the gate open. The only sound she could hear was her boots against the gravel and snow. She looked up at the steps, there were only seven but somehow they looked like a whole lot more.

The steps were wide and not even cleaned off from the snow. Obviously he did not give a damn if he came out and it was covered in ice and he broke his neck one morning. She reached the fifth step and decided that was enough. Diana reached over to put the box by the door when it opened inward and she was looking at two very large black boots standing there. Her eyes traveled from the boots to the long black coat that hung down to the ankles. It felt like slow motion as her gaze went up to the black jeans on lean hips, past the dark shirt and to even darker eyes. Diana felt like screaming and running away like kids would when they got a scare. Instead she swallowed the lump of fear in her throat and stood up to her height of five six meeting his gaze and pasting a smile on her face.

Few things ruin a Christmas party more than an unexpected trip to Hell, and that point was thoughtfully illustrated by this week's episode of The Vampire Diaries! Also a major character got their heart ripped out and placed on a public bench. 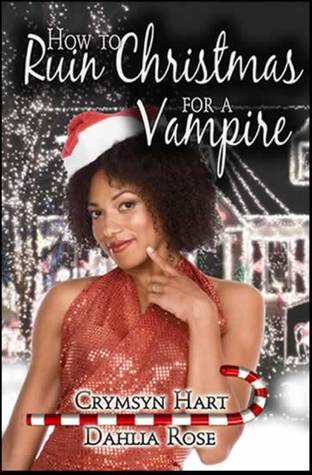 Heart-rippings are the reason for the season! Let's talk about it. We began with a flashback to a shanty village at Christmastime in , and the moment "Monterey" popped up onscreen we knew this would not end well.

A couple of children were roused from their sleep with the promise of gifts from a jolly, bearded friend. Unfortunately, only the bearded part was right. It was Stefan Paul Wesley! He had come to eat everybody! We knew he'd pulled some pretty grim Ripper shenanigans back in the day, but this glimpse was pretty brutal. For example, this was the last Christmas those kids would ever see. Your romantic lead, everybody!

Stefan was feeling much more chill in modern times, as he'd apparently awakened early on Christmas Eve morning to dress every square inch of his home in tinsel and garlands. It was honestly so much that if Martha Stewart had wandered in she'd be like, "Relax. Most importantly, Caroline Candice King was very into it! Speaking of whom, Caroline was having a bittersweet day of her own, as this was the last time she'd see her kids before Alaric Matt Davis whisked them away to some allegedly safe place where they wouldn't be pestered by supernatural creatures anymore.

But there was one problem: The girls missed Seline Kristen Gutoskie , their evil Siren babysitter! Alaric frowned so hard about this. I gotta hand it to this show, sometimes it just gives zero fs. Like, last week's episode ended with Damon Ian Somerhalder 's on-screen DEATH, but this week he simply walked through the front door and his death was barely addressed. Something about how he can't die while serving Cade. It was a pretty cavalier way to break probably the most important vampire rule on this show, but at least this episode didn't waste our time with an explanation.

All we needed to know was Damon and Sybil Nathalie Kelley were here to get their egg nog on! At this point Bonnie Kat Graham and Enzo Michael Malarkey took a quick pause from doing tons of sex so that they could exchange Christmas gifts. Enzo got Bonnie a trip to Paris! In return, Bonnie gave Enzo a couple of t-shirts. She was slightly embarrassed about the disparity there, but sometimes I think you just have to accept that immortal vampires have unlimited resources and you're just an unemployed witch orphan with neither magic nor money.

It was a fair exchange. I really loved when Sybil attempted to help Caroline prepare dinner and she "carved" the turkey by ripping it apart with her bare hands.

For a show that features a constant stream of gruesome, simulated violence, the sight of an actual roasted turkey getting torn apart was weirdly disturbing! Credit where credit's due. So the centerpiece plotline kicked off when Damon snatched a Christmas star down from the tree and impaled Stefan with it! This is no ordinary club, they soon discover when the rabbit shifts from prey to hunter. All Harmony, the Grim Reaper, wants is one day off.

Sign up for my newsletter to get updates on new releases and more.

She has one more soul to collect before she can run away to the sun, surf, and a good book.. But no matter what she does, he isn't coming with her. All Andy wants is a chance at life.